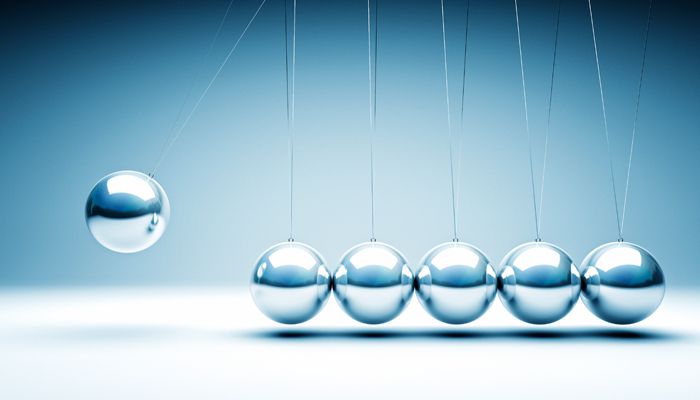 So what is the swinging pendulum syndrome? A whole lot of new players have come into the market. The evidence that there are now some huge additions to the Demat accounts is enough proof of that. Many have joined this game since 2020 because they were forced out of their existing line of work and did not have any other alternatives. Markets have zero entry barriers and seemingly, do not demand any kind of skill sets from those wishing to participate in it. So it seemed like an easy enough shift.

To their good fortune- particularly the ones that came in early, during 2020, fared very well as the markets got into one strong bull phase that kept up for about 18 months! This would have certainly made enough money for the new entrants, perhaps to a level that many had never dreamt about. Traders and investors flourished in the strong bullish environment and it seemed like an unending gravy train.

Until the correction hit in October 2021. At first, it seemed like yet another of those corrections that one had seen for the 18 months earlier. But problems surfaced when the recoveries to new highs did not happen. Most people had got into the habit of buying during dips. Large chunks of new money came into the markets as trends were strong. This was good enough to overpower the big selling by the FIIs- to the extent that even the FM commented (indeed, commended) the retail investors for carrying the day!

During the bull market, everyone became an investor and an ace stock picker. Newly learnt habits, especially when they prove successful, are tough to shake off. So the stock picking continued over the last six months (since Oct 2021) but people found that only few of their picks were really responding like they used to.

Progressively, everyone got loaded with stocks that were not performing. But many were sanguine in the fact that there wasn’t much of an erosion of their portfolios so there hasn’t been any rush to sell out. Thus, the ability to keep the buying pressure has reduced and now we find that even as the buying by domestic funds is still continuing, the retail flow is not able to quite absorb the flow of goods from the FIIs. In addition, IPOs- earlier which were big winners for retail- now started bombing and sharp pullbacks were witnessed in many. These stocks are now at levels where the retail money is certainly stuck in a big way. Many have responded by averaging on the way down, adding to the pile of money stuck in non-performing stocks.

The overall positive feed from the US and other markets also slipped and suddenly US inflation and bond yields and rate hikes etc. became a matter of concern for the Indian investors! Inflation has been inching up a bit in India as well although people have not yet taken too much notice of that yet as the RBI has not been making too much of the matter. Right now, our markets seem to be reacting with shivers every time the Dow sneezes.

This has led to volatility levels increasing. The Vix, which was lying idle at around 16-17% spiked suddenly to 32 levels and that put the scare into the traders of all hues. This had particular impact on the new entrants because they had never experienced a down move and most likely never had the need to deal with it.  When you don’t know how to deal with something but have to deal with it anyway, chances are that you will make a mess of it.

Many of the new entrants (particularly those that came in in 2021) were pulled in by the bull market success of others. They came with limited capital (as low as 20k) and started dabbling in the options markets. They thought they could afford to play that market, since there were instruments (option strikes) that were available at (seemingly) single digit prices. This was thought of as ‘cheap and affordable’. As ever, there are always sharks ready to gobble up such ignorant easy kills and Youtube was flooded with videos by fly-by-night operators who showed how” easy” it is to sell options and make money every day. That the truth is quite something else is a lesson that is painfully learnt.

Then there were the others who had some capital (few to several lacs) who were playing the short-term investing game. With the bull market carousel stopping, they had to find a different way. So, they moved to trading and here, most started with positional plays. Unfortunately, by then some volatility had sent in and holding a position for longer lengths became difficult as frequent mark to market activity unnerved the players. Thus, they went on a journey of shortening trade cycle. From multi weeks, it dropped to multi day but the steadily increasing volatility and the lack of new funds (or unwillingness to commit fresh) shrank the trading cycles even further.

Unfortunately for them volatility only increased as steady losses continued to erode the capital that they were playing with swinging pendulum syndrome . Alongside, the margin systems were tightened steadily by the exchanges and that too made matters further difficult. It steadily got to a point where most were now playing for the day rather than beyond it.

Here, the global scenario is playing it part by creating wide opening gaps almost every second day. Now that was making mincemeat of BTST trades– usually a good play for most active traders.

Now that even day trading is proving to be a problem, players are slowly moving the other way again. They now want to take up multi day plays- so that they can avoid getting whipsawed by intraday volatility or not get caught by opening gaps.

Next, they will go back to positional plays. If they continue to take hits, they will decide that investing is the best route! But soon they will tire of that too- because most of them cut their teeth with short term plays!

This is the swinging pendulum syndrome that every newbie gets caught in. Almost everyone goes through this. Those that don’t learn from this experience are the ones that remain stuck in it- almost like the birth and rebirth cycle of the Hindu philosophy!

What is to be learnt, one may well ask?

The first is that one cannot always be carried, like flotsam, in the market trend. Then one is never in control and is ever trying to find a solution while floating. Instead, one has to study this phenomenon and realise that a certain plan to harness the trend has to be created. This is like sailors who set sail only when conditions are favourable. A study of trends can be done through technical analysis learning. Tools of Technicals can help design an appropriate entry-manage-exit while in a trade so that one can (largely) remain in control of matters.

The second is a learning that volatility is feature induced by many factors. Price moves and indicators like Vix etc. are ways to know or measure volatility. Price moves are a result of fluctuating emotions and hence the whole game of the market is about estimating the Sentiment of the market. This is governed by news and events (most of which are available in public domain) and by order flows (in the short term).

When people simply everyday or every week or month as being the same as every other day/week/month then it is not possible to understand the role of sentiments on price action at all. Sentiments is like the weather. There are seasons (primary trends), climatic conditions (intermediate trends) and the weather for the day (short term trends). Everything is correlated. A good understanding of technical analysis will enable one to recognise these shifts in weather patterns. Throughout history, mankind has modified almost all their activity based on the weather patterns of a place. Market plays are similar. They need to be moulded as per the season, climate and weather that is exhibited currently using swinging pendulum syndrome .

When one can learn to discern these aspects, playing the markets can become relatively less stressful and through practice, one can even be able to take advantage of changes as they happen. Once done, one will become released from the swinging pendulum syndrome! Sort of like achieving Jeevan mukta status as per Hindu philosophy!

previous
CAN IT BE TIME TO LOOK AT CRYPTOS?
next
Why Earnings Season is Important for Traders
8779800688
[email protected]
https://neotrader.in/